SCW’s second release on cassette came out in mid-1985 and was a mixture of new material and live recordings from the Sweet Children of the West show in April that year. The new material continued in the same techno-industrial post-punk style of the first cassette, with added horns in some tunes. This release marked the end of SCW’s use of analogue synths, and drum machines – all future work was done using either ‘real’ instruments played live or digital samplers, drum machines and effects. 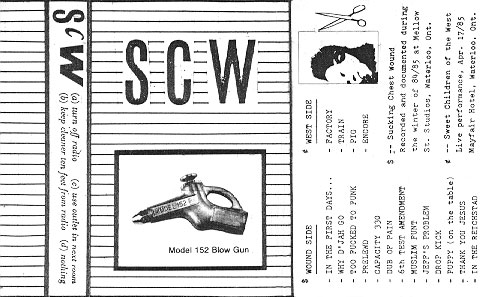 In the First Days…

Same as above but with added synths

SCW gets jazzy.  Horns would become a bigger part of SCW’s sound in subsequent incarnations, first as a free jazz ensemble and then as a disco-funk band.

Puppy (on the table)

Sit see the puppy on the table…

SCW also produced a video to accompany one of the new tunes, Capacity 330. Most of the video footage was recorded at SCW’s Willow St. practice/living space

The second side of the Model 152 Blow Gun cassette is a live recording from April 17, 1985. See the previous post for some video footage of the show.