In July of 1987 SCW was invited to play a show in a park back in Waterloo, Ontario where SCW started out from. The city fathers wouldn’t allow SCW to perform as Sucking Chest Wound so the band temporarily changed their name back to Sweet Children of the West, which had been used previously.

The lineup for the show consisted of legendary Waterloo SCW tribute band Some Cliches Wither, followed by SCW, and finishing with Abstress – the organizers of the show.

This performance marked SCW’s final gig as a free inprovisation ensemble. After this show SCW saw the light and was reborn – at least for live shows – as a disco-funk band.

On the way to the show the band stopped by the local St. Vincent de Paul charity shop to buy their stage outfits. Check it out…

In 1984 SCW managed to gain access to the video production facilities at the local cable station, courtesy of our friend and collaborator Michelle Geister. This resulted in a series of experimental videos created by PhrH and dWM. For more info on these videos check out the Sucking Chest Wound YouTube channel…
END_OF_DOCUMENT_TOKEN_TO_BE_REPLACED

Sucking Chest Wound produced this video in 1985 to promote their first two cassette releases: Arbeit Macht Frei and Model 152 Blowgun. Unfortunately the video didn’t do much to boost sales, probably because it received zero airplay…

SCW’s second release on cassette came out in mid-1985 and was a mixture of new material and live recordings from the Sweet Children of the West show in April that year. The new material continued in the same disco-funk-industrial post-punk style of the first cassette, with added horns in some tunes. This release marked the end of SCW’s use of analogue synths, drum machines and tapes – all future work was done using either ‘real’ instruments played live or digital samplers and effects.

In the First Days…

END_OF_DOCUMENT_TOKEN_TO_BE_REPLACED

On April 17 1985 SCW returned to the Mayfair Hotel in Kitchener, Canada for another performance. This time they performed upstairs at a club called Level 21. For reasons that aren’t entirely clear they performed as Sweet Children of the West; the name would be resurrected later on when they were banned from performing as Sucking Chest Wound. The focus of the show was on videos prepared beforehand and played back on video monitors located throughout the performance space, along with slides projected onto the stage.  SCW performed largely behind screens, occasionally venturing out onto the stage to tweak knobs etc.

Here’s an edit of the performance

The first proper SCW performance occurred on November 30, 1984 at the Chandelier Room of the Mayfair Hotel in Kitchener, Canada. The show came about through a Fine Arts course that PnrH was taking at the University of Waterloo. The show was actually marked by his professor and applied towards his credit for the course!

Ticket for the show – by PnrH 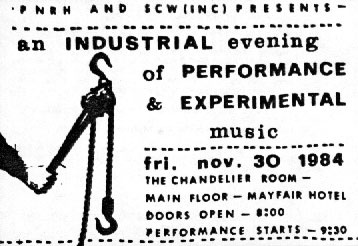 The performers included all four members of SCW plus an additional four performers recruited for the show. SCW played in the background while the other four were up front using various mic-ed up domestic and industrial tools: Charles on vacuum cleaner/balloon, Jim on sewing machine, Claudio on power tools and John on heavy metal. Film projections and video were also part of the staging. All the performers wore masks cast from their faces with plaster bandages, similar to the ‘death masks’ dating back to the middle ages. The workers rose up against their slave masters but the power tools of the workers were no match for the media tools of their slave masters… END_OF_DOCUMENT_TOKEN_TO_BE_REPLACED

Sucking Chest Wound was a collective of Canadian musicians, artists and performers active from 1983-1997. This site documents the history of SCW and archives the sounds, video, graphics and other artefacts produced over Sucking Chest Wound's history. This site is dedicated to the memory of our friends and collaborators Geoff Hendry (GBH) and Emeric Donath (Eli)